What is climate resilience?

We’re seeing a strong focus on reducing greenhouse gas emissions, with net zero* being increasingly adopted by governments and organisations worldwide. But even if we reduced emissions to zero tomorrow, carbon dioxide and other greenhouse gases would remain in the atmosphere for many years, and we’d still witness a changing climate over the coming decades. While reductions in carbon emissions are important, it’s become crucial to be able to adapt to the changes already happening and that are predicted in the future, to keep your business resilient.

*net zero emissions are achieved when the amount of greenhouse gases emitted to the atmosphere is balanced by the amount absorbed or removed by sinks, such as forests, oceans, peatlands or ‘carbon capture’ technology.

The impact of climate change

We’re already seeing some impacts: from 1990 to 2020 the average temperature was 0.9°C higher compared to the period 1960 to 1990. In the future it’s predicted that summers in the UK will be hotter and drier, with increased periods of heatwave and drought, and peak temperatures up to 5°C hotter than they are currently. Alongside this, winters will be warmer and wetter, with a higher likelihood of extreme rainfall.

There’s a whole range of risks resulting from climate change which are multifaceted and interlinked. Here are some common risks: 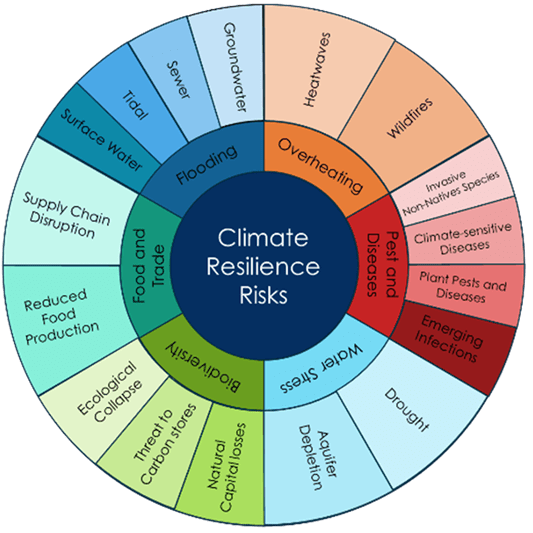 In the City of London, there are six main risks:

As the governing body of the Square Mile, the City of London Corporation is responding by adopting a range of measures to make sure it’s more resilient to the risks resulting from climate change. As a business, you might be vulnerable to some of these risks depending on location or the nature of your company.

How can businesses respond?

Building up your capacity to adapt to climate change early will allow your business to thrive: you’ll deliver wider social, economic and environmental benefits and avoid longer term costs and losses. By preparing early for the future, you’ll better absorb and recover from shocks like storms, droughts and heatwaves. Here, we’re sharing some ways you can prepare for some of the more common risks of climate change. 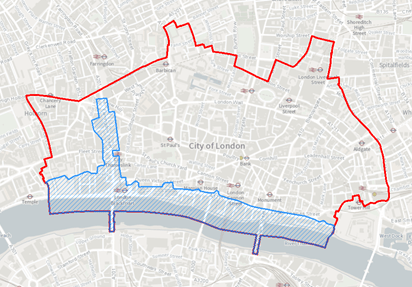 If it’s at risk of flooding, there are ways you can prepare to mitigate damage to your building. The City Corporation has guides for building owners and businesses on preparing for flooding. Some areas they suggest looking at are:

Are you submitting a planning application in the City flood risk area? The City Corporation has produced a planning advice note to help businesses make a flood emergency plan. Check to see if your local authority offers something similar.

In the future, we can expect hot weather in the summer to last longer – this can increase heat stress but there are measures you can take. External shading or shutters can reduce ‘solar gain’ – where buildings become warmer thanks to heat from the sun – and make indoor environments more comfortable. This also means you won’t need to use artificial cooling so often. If you’re in a new development, solar control glazing could also help to manage the risk of overheating indoors. This will help you avoid equipment damage and heat related illnesses for employees.

Many areas, including the Square Mile, suffer from the ‘urban heat island’ effect where temperatures are higher than in the surrounding countryside. This is because of heat radiating from paving and buildings. Some urban greening strategies can help to mitigate this:

The impacts of climate change will not just be felt in the Square Mile. Lots of your employees will be commuting, so other localised climate risks can impact your business. Think about the steps could you take to raise awareness amongst your staff to increase their own personal resilience to these impacts.

This was last updated in March 2022 by Heart of the City. We’ve created these resources for individual SMEs to use. None of our content is to be adapted, reused or repurposed for commercial use.

Climate for SMEs: 4 Steps to Action is funded by the City of London Corporation in support of its Climate Action Strategy targets for a net zero and resilient Square Mile.

Climate for SMEs: 4 steps to action

This toolkit is free to anyone to use, we just need to ask some information about you first. SMEs based in the City of London can also apply for our free course, Climate for SMEs: 4 Steps to Action.